The perfect way to add a PCI-E x1 card to a low-profile HTPC case where the PCI Express card has to be parallel to the motherboard. 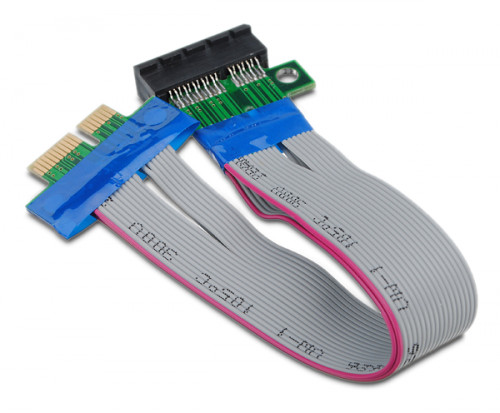 This flexible PCI-E x1 riser card allows you to install a PCI Express expansion card parallel to the motherboard in a slimline PC case where space is restricted. It’s an ideal solution if you want to add a TV tuner or a sound card to the system, for example. One end of the cable plugs directly into the motherboard and the other attaches to the horizontally-mounted PCI Express card.

Excellent quality adapter cable and decent price. Their staff goes out of the way to help.

I was very impressed with the site and …

I was very impressed with the site and following a number of emails to the technical support manager ordered a high spec fast set up. the PC and monitors arrived within the week and were extremely well protected for transit. After a couple of minor setbacks with getting the monitors to talk to the PC I managed to get started. I first became concerned when transferring data files from my pen drive to my HDD it appeared very slow and wouldn't close so I overrode the shutdown and then the PC wouldn't boot up. You can imagine the disappointment over £4000 for a PC which wouldn't work. I contacted the support manager who immediately gave me the option of a refund or they would collect the PC, investigate and repair. I opted for the repair they collected the PC 2 days later and on the 4th day advised me it was the HDD which had broken down (nothing QPC can do about that) they said they would replace and ship the PC back to me ASAP. Another couple of days and the machine was back on my desk. I can't fault Quiet PC's service, from initial enquiry through the problems and repair to return to me, no quibbles and extending help and advice throughout. the PC is excellent and so quiet sometimes I can't believe it's switched on. I can't recommend Quiet PC enough, 11 out of 10, thanks guys.
(Review via Trustpilot)